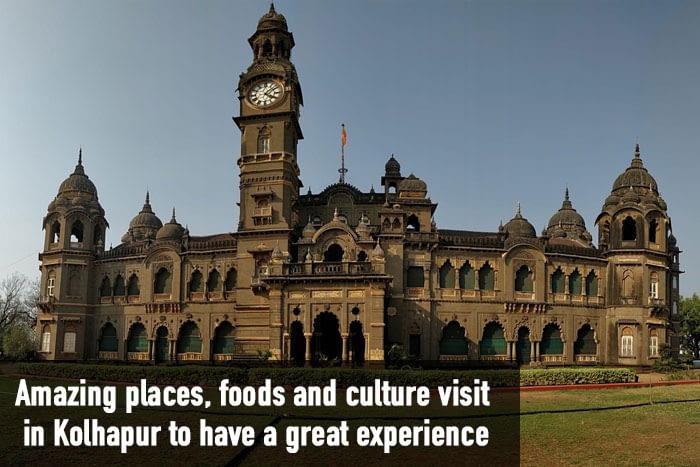 Kolhapur the State of Shahu

The state Kolhapur is mainly known for Chhatrapati Shahu Maharaj of the Bhonsle dynasty of Marathas and the first Maharaja state of Kolhapur. Kolhapur derived its name when Goddess Mahalakshmi kill devil Kolhasur who used to ill-treat the local people.

But it was his wish to die that he names the place where he was killed. Thus, Kolhapur came to be known as Kolhasur and Pur means a city, and the name defines as Kolhapur.

Kolhapur is a small town located in the southwestern part of Maharashtra surrounded by Sahyadri mountain ranges. The state is known for its Historical and Goddes places, Palaces, Kolhapuri Saaj, Kolhapur Chappal, Wrestling (kusti), and famous for its non-veg food (Tambadaa – Pandhara Rasa) unique recipes.

Today Kolhapur is an ideal blend of ancient tradition and Modern effects. Its growth in modern times is simply attractive because of the richness of natural resources such as water, fertile soil, minerals, flora, and fauna (plants and animals). It is the most agriculturally advanced district in Maharashtra and is known as a leading district in agro-based industries.

It develops in the manufacture of engineering products, refined sugar, and textiles Industries. Before 90’s Kolhapur is proud to be a major hub for Marathi Cinema and most of the cinema it shoots in that years and one of the largest per capita income in all cities.

Mainly it is known as farmer’s meal which is used on daily Breakfast known as Nhyari. Pithala means the besan (gram flour) with serving delicious Jawar Bhakri by raw onions and their chutney (Thesa). It is a very popular dish amongst Maharashtrian people.

Misal Pav is a famous dish for Kolhapuri people. It is a mixture of Boil beans, potatoes, shev, farsan and curry.

The Rasa (soup) is made from garam masala, tomatoes, onions, garlic, ginger, coconut and their own masala.

The dish is served by Bread or Pav with hot spicy Rasa. In Kolhapuri style dish is known as Zhanzhanit Misal Pav.

Kolhapur is famous for Non vegetarian Meal. Because the spices and ingredients which they apply in food is delicious and mouthwatering.

The Tambadaa Pandhara Rasa it has own style and taste. Tambada means Bronze-red, Pandhara means White and the Rasa defines Curry.

In villages, The Tambadaa Rasa is used for Medicinal purposes such as Cold or fever. It’s said the ingredients they used are natural and it helps to feel better.

And some hotels give Pandhara Rasa for a starter it has all the white masalas Kaju is the main ingredient of Pandhara rasa. The taste of Tambadaa Rasa is Spicy and Pandhara Rasa is a little bit sweet.

Lavani and Tamasha are part of Kolhapur culture. The word Lavani is derived from the word Lavanya which means beauty. The Lavani dance is a beauty of Kolhapur.

Which perform by the ladies wearing Navwari saree and ethnic jewelry with the beats of Dholak. In Marathi cinema, Lavani dance is held on.

Tamasha is also an extremely popular art in Kolhapur. Tamasha means an Art of drama by singing songs uses of word and dialogues. There are two types of Tamasha Dholki Bharri and Sangeet Bhaari.

Dholki bharri means more dances with the high beats of Dholak and Sangeet bharri means you gave songs and the womens are performing with the dance.

Kolhapur the local spoken language is Kolhapuri. The language has its own unique style by its respect. The rhythm and flow of language are different from other languages.

They Speak Marathi but not the same as because of some different words they are used. The language they spoke is hard to voice but it has respect and easy to express.

If you stay 3-4 days, you love the language and influence and you go back to the city you take the words which are like the Kolhapuri language that you love it.

That the reason Kolhapur language is incredibly famous and most of the time the language is used in Marathi cinema as well as in Literature. The resident of people is very soft-hearted and very helpful and cooperative in daily life.

Places To Visit In Kolhapur

It is one of the greatest Hindu temples dedicated to Goddess Mahalaxmi. The idol of which is a dignified beautiful diamond and precious stones. The Maha Laxmi temple holds a tremendous cultural and historical significance.

The structure was built by Chalukya Dynasty by the ruler Karandev. The architecture of this temple is known for its unique style called Hemadpanthi Sculpture style.

He is the creator of Hemadapant styles and a prime minister in the royal court for 13 centuries. The style defines lime and black stone which was available in this region. The Temple looks beautiful which indicates the Hindu Goddess.

Rajarshi Shahu Maharaj known as Maharaja Palace. It takes 7 years to complete from 1877 to 1884 the long gap to make this palace beautiful and dignified. The designed was construct by Major Charles Mant.

It has one of the most tourist attraction. At the entrance of the  Palaces gate you can see a Big garden with fountain and wrestling ground.

The Palaces is situated in the middle of the garden. After entering you can explore the collections of Chhatrapatis likes costumes, weapons, jewellery, hunting photos, utensils, Swords, animals heads with their stuffs, carpets and many more.

Even today it is the residence of Chhatrapati Shahu. The Entrance fee of the palace per person is Rs25 from 9:00 am to 6:00 pm Palace is open and closes on Mondays.

The Jyotiba temple was built in the ancient period 1730 is one of the twelve jyotirlingas. The temple is situated at a height of 1730 feet. Its only 18 km from Kolhapur city.  As per hindu mythology lord Jyotiba is an avtar of three gods Brahma, Vishnu, and Mahesha.

Every Year a grand fair is held on full moon night of Chaitra and Vaishak in the Hindu calendar the festival is celebrated by spreading a Dark pink Color called Gulal.

Panhala fort is also known as Panhalagad. It passes from the Sahyadri mountain ranges to the coastal areas. The fort is 20km northwest of Maharashtra. The fort tells us Ancient Indian heritage and also a grand region of Chhatrapati Shivaji Maharaj.

The fort is constructed by big black stones and great walls. This is a famous fort where Tarabai spent her formative years. You can see a Pavan khind where the battle takes place and remark during the battles.

Nowadays in the fort, the shoot was done while shooting we identify the fort and re-describe the Chhatrapati Shivaji Maharaj Panhala fort. There are tourist guides who give a huge amount of information which is never forgettable.

One of the best and relaxable with family and friends which gives peaceful environment and natural beauty Rankala is best. It one of the most tourists attraction in Kolhapur.

Rankala gives the feeling of Chaupati memories by snacks, food vendors, Bhelpuri, Ragda puri, Horse riding, and many more. There is a lot of greenery and fresh air that attracts towards the heart it has great experiences which are never ever forgettable.

The Modification of Street style fashion 2021

Impact Of Diwali On Environment