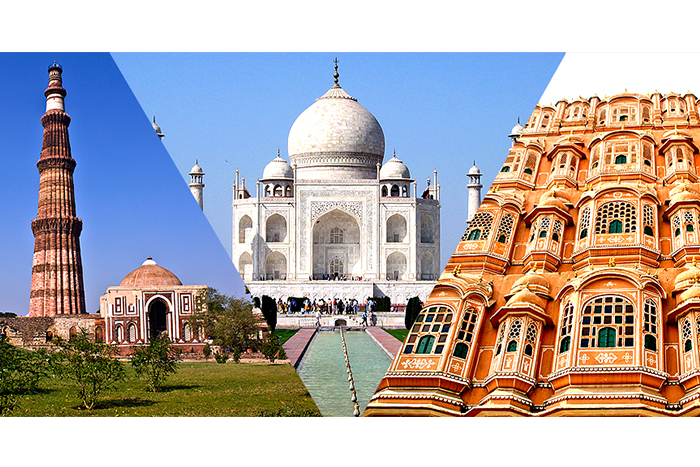 Delhi Jaipur Agra is known for its golden triangle tour these places are good for sightseeing lack of tourist visited to see the Culture, Traditions, Art, and Foods. After a few hours of relaxation at the hotel room where we are going to explore golden triangle tour this places is always hustle and bustle. A local cab will charge around Rs 2000 for whole day tour.

Delhi is famous for its vibrant bazaar filled with foods, spices, sweet shops. Delhi ranked second most productive metro area of India. The second wealthiest city in India after Mumbai. It has the second-highest GDP per capita. Delhi is an important commercial, transport, cultural, and political hub of India.

Lotus Temple is a building dedicated to the Bahai’s Faith. This magnificent structure is look like a stunning white petal lotus building was completed in the year 1986. The lotus temple is one the Seven Bahai’s houses of worship present around the world. Currently the tourist spots in New Delhi during a peak hour many people arriving in this park and taking selfies. Then plan to visit next destination Qutub Minar.

Qutub Minar it is an UNESCO world heritage site located in Mehrauli. Construction was stared in 1192 by Qutub Ud-Din-Aibak the sultan of Delhi. It is the tallest individual tower in the world and second tallest monument of Delhi. Mosque in the Qutub complex is one of the magnificent structures in the world it was the first Mosque built in Delhi after the Islamic conquest of India.

In front of the Mosque there is the famous Iron pillar is one of the world’s foremost metallurgical curiosities. It is the most visited tourist attraction most of time you can see large tourists roaming gathering information around this place. Entry fees Rs40 per Person for India tourist and 200 Per Person for Foreign tourist and Camera equipment charge Rs30 for Indian and Foreigners.

Raisina hill is the area houses of India most important government buildings including Rashtra Pathi Bhavan. The official residence of the President of India ant the secretariat building housing the prime ministers offices.

The hill is slight elevated portion higher than the surrounding area there are two blocks the building in Left hand side is the Defence ministry and right side is the secretaries building housing the prime Minister.

This is probably most and popular known place of New Delhi. The Fort is in centre of the city it was a main residence of Emperors of the Mughal Dynasty. The fort was constructed by Shahjahan because of a capital shift from Agra to Delhi it became a world heritage UNESCO site in 2007.

The main entrance of the fort is Lahori Gate the named Lahore because its orientation the city of Lahore. After entering Lahore gate there is a small market named Chhata Chowk which sells local hand made products where you can enjoy the street market and do shopping here.

The all-India war Memorial Popularly known as the India Gate. Is located along the Rajpath in New Delhi. The ground structure of India Gate is an inspiring sight. This 42 meters tall historical structure is one of the largest Memorial in the country. It also a treat for Architecture lovers dedicated to 82,000 Indian and British soldiers who died during the First world war and the Third Anglo Afghan war.

This monument has structure was laid down in the year 1921 and the final building was unveiled in the year 1931. The president of India gate also a House to Amar Jawan Jyoti which is kindled structure right underneath the arch way every time you see people around at complex. Behind India gate plan to visit National war memorial which is also a beautiful place to visit.

The National War Memorial is a monument erected by the Government of India around India Gate in honour of the Armed Forces. It was established on 25th February 2019 name of Martyrs killed in wars inscribed on the memorial walls. War museum will be also constructed try to visit there at a time of sunset you can enjoy a retreat ceremony here.

Agra is a beautiful city located on the banks of River Yamuna in Uttar Pradesh. The city was on the capital of famous Mughal rulers its prime tourist attractions of the country. It has some most Mughal era buildings like Taj Mahal, Agra fort, Fatehpur Sikri.

The distance from Agra is 233.1 km via Taj express highway or Yamuna express way. This is the shortest road from Delhi to Agra a local cab will charge Rs3,000 for a whole day Agra tour from Delhi. It will take around 4 hours to reach Agra from Delhi via road.

The Road has many lanes so that is impossible to get slowed down in road due to traffic. A train will take around 2 hours to reach Agra from Delhi the fare is around 150 per person and the Bus fare around Rs 400 per person.

It is one of the most visited tourist attractions entry fees for Taj Mahal Rs 50 for Indian tourist and for foreign Rs 110 there is one additional charge of Rs 200 for visiting the main mausoleum. Which is optional for children up to 15 years are free to enter in premises. Taj Mahal is integrated complex of structure the main building of this complex is famous Ivory White Marble Mausoleum which Mughal emperor Shah Jahan has built in the memory of his loving wife Mumtaz Mahal.

It was also declared as a winner of the new 7 wonders of the world the place attracts 7-8 million visitors from all over the world. If you are visiting the main Mausoleum, then you must purchase disposal shoe cover which will be charged Rs 20 per pair.

After entering the main entrance you can see a long passage way passing through a well main area garden. In the middle of the passage there is a beautiful water fountain. On a public holiday Sunday will see a large crowd here taking pictures in front of this wonders of the world.

You will be amazed by beautiful architecture moving from this Palace you will come to the Diwan-i-Aam or the public audience hall. This beautiful hall famous for Artwork on its pillars behind Diwan-i-Aam there are imperial building built by emperor Shah Jahan. The garden in front of the building is known as AUNGRI BAUG you can see the residences of Emperor Shah Jahan and his two Daughters Jahanara and Roshanara.

Unlike Jahangir Mahal these building is built by white marble stone. Throughout the year you can see many tourists visiting the beautiful fort and enjoying themselves.

In the evenings you can be entertained by light and sound here. There are numerous hotels and resorts in Agra that you can visit for the night. All of them have online booking facilities a typical midrange hotel it will charge around Rs 2,000 for One night.

Fatehpur Sikri city was founded by Mughal Emperor Akbar after his victory over Gujarat. The main place to visit here Fatehpur fort Entry for Fatehpur Sikri Rs 50 for Indian tourist and for Foreign tourists Rs 610 Children between up to 15 years are free to enter.

Behind you can see Anoop Talab the tank is made up of red sandstone in front of Talab there is Panch Mahal. Panch Mahal was built by Akbar the structure stands close to the zenana quarter Palace (harem). There are 84 pillars on the first floor each pillar had a Jail work from where we can see a glimpse of the city.

Beside Panch Mahal there is khili mahal the emperor private palace this building is connected to the ladies harem. At the centre of the ladies hareem stood the palace of Jodhabai Hindu Rajput wife. The palace has notable Gujarati influencer in its architecture and is built around a courtyard. In this palace you can see the summer and winter place of Jodhabai these two are describe storied structure famous for their jail work.

On the third side you will see a temple where you want to worship Jodhabai. At the ground floor you can entertained by an audio-visual show which tells the story of Fatehpur Sikri. This fort is now a world heritage site and experiences thousands of visitors every day.

The distance From Jaipur to Fatehpur Sikri is 207km via NH21 highway and it will take around 4 hours to reach. At the entrance of Jaipur you can enjoy the beauty of Aravali hills.

The Pink City in Jaipur is an old fortified city built by Maharaja Jai Singh in the year 1727. The walls that marks boundary of Pink city is about six meters high and three meters thick and encompasses several structures. In Jaipur you will find many hotels in different budget range.

City Palace is the magnificent palace in Jaipur is one of the most tourists’ attractions in the city. It was built by Maharaja Sawai Jaising during the years 1729 to 1732. The vast complex of the place occupied One Seventh of the Walled City it was one of the seats of Jaipur. The architecture of this palace needs a special mention as its a palace blend of Mughal and Rajput Style Architecture.

Hawa Mahal stands at Intersection of the main road in Jaipur Badi Chaupar. Hawa mahal derives its name for its unique structure which is a mesh of small windows that allows cool wind to enter the palace to keep it comfortable during the hot summer days.

It is located right to the edge of the city palace Jaipur. An entry fee for Hawa Mahal is Rs50 for Indian and Foreign tourists. After entering you will see a charming mountain from where you can way up to different floors.

Hawa Mahal story is a five-story building each of which has a uniquely decorated chamber. It is decorated with 953 small windows, also known as ‘Jharokhas’. There is a slope on every floor through which you can move to another floor from the top of the palace. You can get a brilliant view of the city palace Jantar Mantar and tie every busy Sireh Deori Bazaar there is a small museum which holds some miniature paintings.

Best Places To Visit In Manali 2020

How To Explore Best Travel Outfits 2020

What are the benefits of Immunity booster supplements?