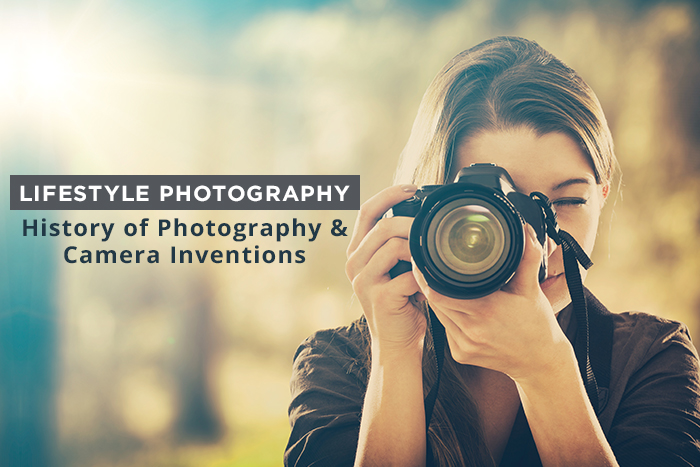 Photography is the art of capturing the inner and outer beauty of life in today’s world camera is an important piece of equipment.

At the same time, it becomes to capture an enjoyable moment or recognizable day while clicking the photos. Photography has no defined meaning it has different meanings for everyone.

When it comes to Photographing people, it is a marriage of the minds between the Photographers and the Subject that often leads to the perfect smile.

The earliest camera was the Obscura, a natural optical phenomenon predicted by a visual image on the other side of the screen.

It was a small hole in that screen and forms an inverted image on a surface to the opening, adapted to making a permanent image by Joseph Nicephore and Louis Jacques Mande Daguerre of France in the 1820s – 1830s.

In the 20th century, cameras were for many different purposes, including aerial Photography, document copying, and scientific research.

Before the invention early camera were room-size with space for one or more people. In which they gradually evolved into more and more compact models, such as boxes, tents or rooms with small holes in the box.

The camera product passes light through the exterior and strikes the surface inside the area where the scene is reproduce, reversed, and reversed but protected by color and vision.

The Camera Obscura with the lens has been use since the late 16th century and has become popular as an aid to painting and drawing.

The Obscura box camera was later develops as a geographic camera in the late 1st century, where the camera expose light-sensitive material to the Obscura projected image.

The first camera was designed by Johann Zahn in 1685. But the first photograph was clicked in 1826 by Joseph Nicephore Niepce.

Nicephore Niepce took the Photograph in France The shot was from the Window, and it is name “View from The Window at Le Grass” is said to be the World’s earliest surviving photograph.

To Capture this Images Niepce wanted to use a Light-sensitive material so the light itself would etch the image. After so many struggles, they didn’t capture the right photograph what he wants.

He develops some sort combination of Bitumen of Judea coated on to a piece of glass or metal. The bitumen is hardened in proportion to the amount of light that hit it and then the photograph is click.

Mathematical physicist James Clerk Maxwell took a photograph, and photographer Thomas Sutton Inventor of the SLR camera shot the above photograph of a colored ribbon.

Maxwell propose that if three Black and White photographs of a scene were taken through red, green, violet filters and the transparent prints.

The images were projected on a screen using three projectors equipped with similar filters. The human eye would perceive the result as a complete reproduction of three colors in the scene.

The first digital photograph was taken in 1975 it almost 20 years before KODAK engineer invented the digital camera.

This is a digitally scan photo of a shot initially taken on film. The picture is Russell Kirsch son a square photograph with revolution 176-176.

THE FIRST PHOTOGRAPH OF A PERSON

Louis Daguerre capture the first Photography of human. The performance lasted for about seven minutes and was intended to capture the Boulevard du Temple in Paris.

The image requires a lot of time which is not enough to impress a lot of walking down the street. The first photograph ever to include a human being however if justify the images we can see a man standing and getting his shoes polished.

The arrival of the digital camera has made photography mainstream. The medium that is over two centuries old was changed on its head in the past two decades.

It is continuing to evolve, and in the age of social media, people are using photographs to capture and share moments of joy and love.

In 1975 Kodak engineer Steve Sasson created a digital camera for the first time it was built around the Kodak factory using kits and leftover parts.

The camera shape its like breadbox and it took 23 seconds to capture the image. It was only 0.01-megapixel Excel images shot in black and white saved to cassette tape.

The Photokina trade show was first unveiled in 1988 in Koln Germany consider being the first real digital camera on the Fujix DS-1P.

It records images in a 2MB SRAM memory card that holds a maximum of 5 photos. But this Fuji camera not upto the mark in that time so sale going down and people reject product.

In 1991, Kodak created digital SLR for the first time. The Kodak Digital Camera System (DCS) was originally a modified Nikon F3 with space for film sensors and Winder’s sensors.

The camera had a built-in 1.3-megapixel Kodak CCD for capturing images. The camera cost $ 20,000 and required an external data storage unit.

That the photographer needed to wear on the shoulder strap and was connected via cable.

Digital cameras enjoy a new level of Photography and have numerous advantages, many of which were impossible with ordinary film cameras.

Digital cameras are more convenient than film cameras capturing an image can be instantly checked on the monitor and retaken if necessary.

Additionally, you can view your digital images on TV or PC, print them at home, and even send them to friends on the Internet.

HOW CAMERA CHANGE THE WORLD

The camera was an excellent tool for scientific research. It was newly discover species an object in the scientific field and the experience of catching people in distant places in human life.

The camera helps create and preserve memories of historical or emotional values. Photographs are for notable moments and events from history that were made possible by the camera.

Every day children are born, people get married, and it’s all documented by the camera, the camera of the past is a resource that helps us remember the value of minimal history.

The use of cameras to record many areas of human life has greatly changed the concept of privacy. The ubiquitous presence of photographic machinery eventually changed humanity’s sense of belonging to observation.

The photograph was considered incontestable proof of an event, experience, or state of being which is why the camera changed the World.

A Camera is a large Equipment where we store our Art, Culture, unforgettable memories and many more. A device changing the Perception and brings passion into the World on a large scale.

Cameras could see everything they can see down into the depths of the ocean, and up millions of miles into space.

They capture moments and later freeze them for enjoyment photography has formed new means of education and history, along with a new lifestyle itself. “The limitations in our photography are our own, because we are what we see.” by Ernst Haas told the photojournalist. Photography opened a new fact of ideas when it was first created, and it was obvious that this concept would Change passion in Photography.

As a camera changes the people worldwide where a photography skill is used on a large scale for Entertainment and Bollywood industries it reduces the work by changing the Role and the Scene footage.

But some case the Small cameras has taken place instead of Big Camera using in today’s World.

Small cameras CCTV are using in different perspectives such as in Malls, Schools, Offices, and Stores, where we can easily see the habits and reaction of the people they are doing.

A camera built a new level of enjoyment in taking a picture’s and have numerous advantages. Many of which are simply with the ordinary camera as a small budget digital camera to improve photography skills, taking advantages and benefits for them.

Teachers and Students can use Digital Camera in different settings, including Field Trips, Science and Art Project. Using camer6a in School and Projects can help learn Photography Skills that they used at home or their Jobs. They need to take pictures if they work as a Photographer or Reporter. Working with camera improve computer skills and Capturing the scene with the help of using a camera.

It is difficult to capture the Image or Scene by the Press Photographers in earlier camera because they mostly reporters use 35mm film cameras in the 1960s.

Previously the film has developed and printed in the darkroom with a special processing unit. It is required a lot of chemicals and was an expensive process making Photography an Expensive hobby.

Today the Image capture by Digital Camera can easily be print at home with a standard inkjet printer which is a lot cheaper and gives you more control over the result.

Nowadays the crime rates are increasing day by day, so multiple areas have set as CCTV cameras where crime is control. Not only crime it also capturing the behavior and the reaction of the people.

Public violations rules like trespassing signals, unfollow red lights, speeding, accident, and many more can be control by looking at their actions.

These Cameras are useful for Recording, Detecting, and Deterring any activity is placed on Apartments, Societies, Offices, Property, and many more.

Because these camera functions are vast and it is easily capturing footage and record the systems are set up by strategically placing a network.

In some cases, most people take disadvantages while applying surveillance cameras. They misuse the camera and constantly watching them their actions.

The cameras installed in strategic places biggest installing security camera is Deter Crime. Because once they placed you will be able to see their effects on people.

But they cannot stop theft or stop a crime they do not alert neighbors or police like an alarm system. Which may no longer feel absolutely safe and even cause you to lose faith in them.

Importance of Home decor to changing our living lifestyle