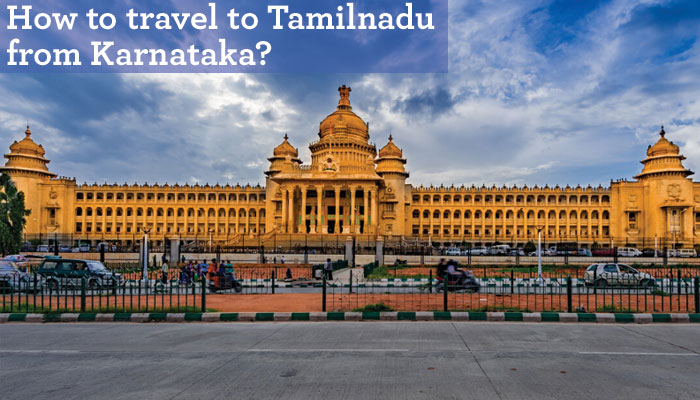 Tamilnadu and Karnataka are two beautiful Southern states of India. The two states define as Cultures, Temples, Traditions, Foods, and Classical Indian Dance. Lack of tourist visit in Every year and many of them are for business purpose.

The capital of Tamilnadu is Chennai. Chennai is famous for its beaches, landmarks, and temples. Chennai is the main Railway station and the fastest route to travel. The local language Tamil most of them spoke Hindi because Tourister visits on the local market.

The capital of Karnataka is Bengaluru is a big Technology and IT hub known for its Shopping and Nightlife. There are major software companies that generate revenue from software exports. Total 1973 companies and headquarters involved Information Technology firms like Infosys, ISRO, and Wipro.

It’s famous for Luxiours Temples, Foods and Culture. The Local language Kannada most of them spoke Hindi because of Business as well Tourister visit to explore.

By Road, you can explore the bridges take a break to hotels for breakfast or lunch. The distance to Tamilnadu from Karnataka via NH 38 and NH 48 is the fastest route it takes 15 hours and 850 kilometers distance to travel.

By Bus, takes 8 hours to reach heavy traffics it consumes times. Most people are preferred to travel by taxi is one of the easy route and less time.

BEST PLACE TO VISIT IN TAMILNADU

Ramnathaswamy Temple is one of the Char Dhams of India located on Rameshwaram island. The temple is devoted to Lord Shiva and is one of the twelve Jyotirlingas. The temple has 121 pillars in the outer corridor the height of the pillar is 30 feet tall from the floor to the center of the roof. There are 22 Teerthams (wells) in Ramnathaswamy temple devotees take bath in Teertham they enter the temple.

They believe that taking a bath in Teertham purifies their soul. The existence of the temple is to be there even Lord Rama arrived there. The story says that the Shiv Lingam presents in the temple by Lord Rama to apologize for the skin of killing Ravana who was Brahmin. The temple has two Jyotirlingas one of them is Ramalingam and Viswalingam.

Lord Rama wants the largest Shivlingam to worship lord shiva to get free from sins, he asks Hanuman to bring it from the Himalayas which is the residential of Lord Shiva. Hanuman took a long time to bring Lingam lord ram asked Seeta to create Shivlingam.

Meenakshi temple is a historic temple on the banks of river Vaigai river. It is in the temple city of Madurai. Goddess Meenakshi is the main deity of the temple. The temples signify the importance of women in families. This temple is about 3000 years old. It is a wonderful mix of legends myth and brilliant architectural techniques.

Ancient mythology has it that Lord Shiva came in the form of Sundareswarar to marry Meenakshi an incarnation of goddess Parvati. Their wedding believes to the biggest event on earth with millions of peoples God & Goddesses coming down to Madurai to bless them. Their wedding celebration for 12 days starting from flag hosting to ends wedding with their Thiruvizha procession of Meenakshi & Sundareswarar in a Temple car.

Tamil Sangam literature mentions this goddess temple in 6th Century texts. In Tamil classics, it is mention that the city is a Lotus-shape Meenakshi temple is in the center, and enclose streets are in the shape of petals. The entire structure viewed from above known as Mandala.

The mandala is a structure of symmetry and form according to the laws of people. This temple displays architecture having 14 towers the range of towers is 45 to 52 meters in height. Each tower displays thousands of mythological stories and sculptures.

Marina Beach is the longest natural urban beach in India. It is one of the most famous beaches for holiday destinations. The months of November to February are the best time to visit a beach. It has a cool atmosphere and freshwater will greet you.

Marina famous for its nightlife Clubbing, Parties, and high ends pubs is the one thing you do not want to miss out on. Marina beach serves as a perfect spot for locals and tourists to spend their weekends at the beach.

Ooty is a famous hill station in Tamilnadu is known as Udagamandalam which serves as a top-rate tourist destination. Famous for its Tea Gardens, Waterfalls, Mountains, Lanes, and charming Atmosphere. The majestic queens of the hills form part of the Nilgiri Biosphere serves a delicate and elegant ecosystem.

Ooty has been developed to give tourists a rare glimpse like the rest of the reservations, many of which are out of bounds under conservation efforts. Every year many tourists visit the gem of the hill station.

Kanyakumari is a coastal town in the state of Tamil Nadu. It is locate on the southernmost tip of the Indian ocean. The town was known as Cape Comorin through British rule is popular for watching a sunrise, sunset over the ocean waters. The multicolored sand is a unique feature you see here. This place has been a great center for art, culture, civilizations, pilgrimage a famous center for commerce and trade.

Kanyakumari enjoys a pleasant climate and the best scenic view. The best time to visit Kanyakumari is the month of October-March during summer temperature can rise to a high of 34.8°C it can low during winters at 20.4°C.

BEST PLACE TO VISIT IN KARNATAKA

Mysore is the fastest growing city in Karnataka. The city has a large tourism industry which attracts tourists all over the world. The city was rule by the wonder dynasty and is well known for its rich architectural history, palaces, and beautiful gardens. It is located at the bottom of the Chamunda hills and is about 150 KMS from Bangalore.

Mysore is famous for Royal palaces, delicious pak, delicious food, and its culture. Recently the city was declare the second cleanest city in India by the Union Urban Development Authority. The rich glorious city attracts tourists around the world.

Hampi is UNESCO World Heritage Site in India located in Karnataka state. Is famous for its beautiful temples, ancient market streets, Sculptures, and Monuments. It has a tropical climate in hot summer (April-June) and cools in winters (October-February).

The rocky landscape adds to the historical atmosphere of the site. It Famous for the main Purandara festival was held on the month of January-February in Vittal temple to celebrate the birthday of medieval poet-composer Purandar.

Coorg is a district in Karnataka call Scotland of India. Is famous for its Coffee plantation, Lush greenery, Waterfalls, Heels cover forests, and Misty landscapes. A perfect year-round destination best time to travel from September to March. Coorg is well connect by road with all major cities of Karnataka.

You can do sightseeing from the famous monastery popular known as the golden temple. It built on the land donated to the Tibetan refugees by the government of India. It is the second-largest Tibetan settlement outside the temple.

Udupi is a coastal town by Hanging Bridges to Secret Island and Light Houses. Is one of the top tourist attractions and various educational Institutions. Udupi is famous for small towns, sea, hills, rivers, museums, temples, heritage village, and gardens.

Udupi has a list of famous dishes Avalakki Upkaari, Koddelu, Kosambari, and Holiges the popular dish is Masala Dosa. Best time to visit Udupi in the Winter season where you can experience a pleasant atmosphere.

Gokarna a cooler version of Goa a tiny Coastal town in Karnataka. It is a beach lover Paradise famous for 4 main beaches Om Beach, Kudle Beach, Half Moon Beach, and Paradise Beach are all you need to escape the chaos of the city. Spend your days watching kaleidoscopic sunsets gorging on delicious Continental Food.

The place is well connect to India’s major cities By Air, By Train, By Road. The best time to visit October-March when the weather is pleasant, the sea is relatively calm. In April and May, humidity increases, making it a bit uncomfortable.

How To Explore Best Travel Outfits 2020